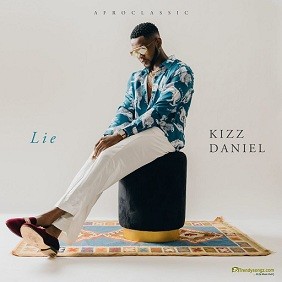 Produced By: Philkeyz and Blaise Beatz.


The Nigerian highly-rated singer and songwriter Kizz Daniel has stormed out with another hit song called "Lie" released earlier this year.


Oluwatobiloba Daniel Anidugbe also known by his stage name Kizz Daniel, has pop out with his awaiting new song he titled "Lie" some months ago which has been echoing in our speakers all over the country, deriving the attention of all to himself. The talented singer KIzz Daniel got prominence into the Nigerian Entertainment Industry with his singles "Laye" and "Woju" off his New Era album in 2016. He is among the successful and respected musician in Nigeria for his kind of music.

Kizz Daniel single hit track "Lie" was produced by Philkeyz and Blaise Beatz under the Flyboi INC. Imprint earlier this year. It was a nice tune he recorded for the listening pleasure of his fans. He has never relented in his passion for music which has made him the artiste everyone is eager to listen to his music, because when it comes to R&B and Afrobeat music, you can trust him in giving you the best of it. Kizz Daniel is a genius when it comes to music.
Download and enjoy this melodious tune "Lie" by Kizz Daniel.

Kizz Daniel - Upon Me