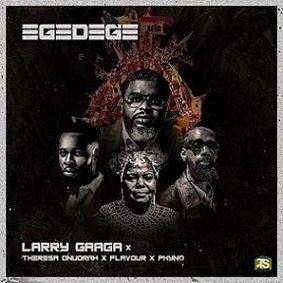 Larry Gaaga has been a trending music artist and record producer in Nigerian and across Africa. He brings on this highlife traditional dance track captioned Egedege which he linked with the Nigerian top artist's Flavour, Phyno, and the female goddess inspirational highlife singer, Theresa Onuorah in making this long-awaited song called Egedege a success.

It was a wonderful excitement and enjoyment to this year 2021 from the Gaaga Muzik boss, Larry Gaaga who is back with another package for his music fans with this song he tags Egedege. This song tagged Egedege is a new song that has taken charge of the streets just a few days after it was released.

The female highlife traditional singer proves that she can not be old with what she knows best to which is recording music. Flavour and Phyno took a perfect role in making this song a hit. Masterkraft is the music producer behind the production of this amazing record titled Egedege.